super model of lots of things, but in particular, of disruptive sustainability (keeping on keeping on-ness).. (click image above for story)

Jerry Paffendorf loves developing new ways for the super powers of the web to impact the realities of the world. The challenges of Detroit have become an endless inspiration. He has deep experience in the world of social technology startups, art and media, and a Masters of Science in Studies of the Future from the University of Houston-Clear Lake. 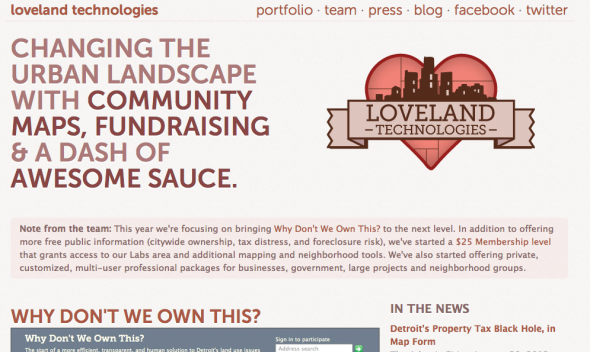 Jerry Paffendorf loves developing new ways for the super powers of the web to impact the realities of the world. The challenges of Detroit have become an endless inspiration. He has deep experience in the world of social technology startups, art and media, and a Masters of Science in Studies of the Future from the University of Houston-Clear Lake.

Mary Lorene Carter is a social entrepreneur living and working in Detroit. Mary has studied at The School of the Art Institute of Chicago, Wayne State University, and University of Michigan. Her current projects LOVELAND and the Imagination Station focus on social ownership & alternative fundraising.

Larry Sheradon is the web craftsman behind LOVELAND’s online presences. Before embarking on the LOVELAND micro-real estate adventure and beyond, he worked with data visualization, 3D game engines, GIS & urban data, virtual worlds, smartphone apps, and in the social/casual game world.

Alex Alsup spent time developing iPhone games in Philadelphia and Vietnam, where he set his sights on Detroit. He moved to the city to take a job as a project manager with the design firm o2 creative solutions. Alex joined LOVELAND to develop applications for their suite of tools. Alex holds a BFA in English from Skidmore College.

“I bought a house recently on an eBay-style auction. I used Jerry’s [Paffendorf] site to check it out. I decided to move out of Midtown. It’s more of a challenge to live in a different neighborhood, somewhere that’s not trendy. Maybe if I move here, and people come to events and parties at my house, I’m exposing them to other neighborhoods.

“The auction was exhilarating. I paid under $10,000. I know the neighborhood–you don’t see …

why don’t we own this site/mapping

an updatable sort of wikipedia for property conditions, ownership and vacancy in the city…

how do you make the spreadsheet – human..?

Jerry Paffendorf bought a vacant lot in Detroit for $500 back in 2010. And then he did something truly unusual — maybe even unique — with it.

He created a map that parceled the land on East Vernor Highway Street into a grid of 10,000 one-inch squares, and he invited people to be inch-vestors in the property for $1 a square. About 600 people from all over the world bought them all.

In the spirit of online games like FarmVille and SimCity, the project was designed as a provocation. You own an inch in Detroit. What do you want to do with it?

He said the mapping project introduced him and his collaborators to the world of vacant properties, how they are mismanaged and misunderstood, and how the city of Detroit at that time had no capacity to have any information about itself. “To a shocking extent,” he says, “the city had no mechanism for understanding the space of itself.”

And since its start, Motor City Mapping has been expanded into a national project called Loveland, that aims to “make the invisible ownership grid that divides up property around the country — and the world — visible.”

“The United States was the first country founded on the parcel,” Mr. Paffendorf said. “One of the things that made the country grow was dividing it into the squares. We’re currently trying to put every property in the country online.” There are an estimated 150 million parcels across America. So far, Loveland has put 100 million of them online and made them freely available.

The catalyst for Mr. Paffendorf’s expansion was Detroit’s declaration of bankruptcy in 2013.

Detroit owns nearly 100,000 properties — what amounts to 20 square miles of vacant land in the city, an amount roughly equivalent to the size of Manhattan. About 56 percent of those foreclosures are now blighted or abandoned properties. Of those, approximately 13,000 are slated for demolition at a projected cost of $195 million.

Data like this is sensitive, and data alone certainly cannot solve the problem.

Forgive me that this is half baked, but I’m trying to puzzle through something. It’s stuck in my head that no one has really presented an actionable theory of how land in Detroit should be owned and *why, starting with how it’s currently owned and how it affects our politics.

*why is it owned.. huge.. perhaps solution is in not owning..

Here’s a tentative start towards a theory (note: I know some people are sensitive about anything that even appears to criticize certain powerful parties — I’m trying to drive down the middle, man, no knocks intended):

In Andro Linklater’s Owning The Earth he talks about a book from the 1650s called Oceana. Oceana was the first effort at telling the history of political power and the economy through land ownership. It was very influential with the framers of the US Constitution who were trying to build a representative democracy and needed a land ownership model to facilitate that.

Oceana says whoever owns the land has the power, and how your land ownership is distributed will tell you the kind of government you’ll have. If your ownership and government are out of alignment there will be an explosion.

If the land is owned by one person or a few people, and you try to have a democracy, there will be an explosion and many people will either take the land, or the small number of land owner/s will end the democracy.

If the land is owned by many people and a small number of people try to have a monarchy or dictatorship or oligarchy, there will be an explosion and the people will either create a democracy or the monarch/dictator/oligarchs will take the land and consolidate it under their ownership.

Now it’s interesting to even loosely apply this theory to Detroit and see what we get. The result *feels* like Detroit to me right now: mostly government departments and corporations controlling the narrative and policy conversations and getting annoyed when other people mettle.

Since I’m talking theory I’m going to use very loose round numbers here. I’m speaking in shapes, not specifics.

The Detroit Land Bank Authority owns 100,000 (which they received through the Wayne County Tax Foreclosure process). The land bank is quasi-public and very much controlled by the Mayor and his appointees (I’m not saying this as a criticism). So we can also call the land bank The City in this model.

There are (again very roughly) 200,000 occupied homes in Detroit. More than half are now owned by land lords so the tenants are renters (many of the land lords purchased formerly owner-occupied homes through the Wayne County Tax Foreclosure auction). According to census numbers and a recent Detroit Future City report, this is the first time since 1950 that renters have outnumbered homeowners in Detroit.

The remaining 100,000 properties are a mixture of blight and various kinds of corporate ownership. Let’s focus on the corporate ownership, which has a connection to the blight as Detroit’s depressed property values have allowed Dan Gilbert, Mike Illitch and other investors to make remarkable purchases that have consolidated land and development control throughout Downtown and Midtown (I’m not saying this as a criticism). Note: this is the most exaggerated category in the model as it stands, but I think it’s fair for the sake of simplicity to consider corporate ownership as the last big basket — that is, some profit-seeking motive that is primarily interested in seeing property values increase and successful rent-seeking businesses move in.

So think about Detroit politics and decision-making power today and think about this broad distribution of land ownership.

To me this explains how it’s even remotely possible to have a situation where something like tax foreclosure can run amuck as it has without anyone stepping in to do anything about it.

Save 4,000 occupied homes from the auction this year and turn the occupants into owners? Neat idea, but I’m busy placemaking, demolishing, foreclosing, horse-trading, and cutting big development deals to worry about that.

The interests of the current land owners just don’t work out in the favor of Detroit residents when it comes to property ownership.

so let’s disengage from ownership.. let’s just try that.. somewhere.. to see..

The corporate ownership benefits from low property values on acquisition and then works to raise them in pursuit of profit. The land bank consolidates property through foreclosure and then works to do something with it, often for political profit. Landlords purchase properties at the foreclosure auction and then seek to get the highest recurring payments from renters. The Detroit homeowner is the smallest class, and the most difficult class to grow, but the most important class to having a representative democracy. Renters can be pushed aside at any time and so are constantly susceptible to gentrification (really, the at-risk-ness of renters is the biggest problem people have with gentrification — they can live somewhere for years and be pushed aside in a second).

So what does the model add up to? How do these parties interact? What should we work towards and what should we expect to happen?

At the end of the day we’re supposed to be living in a representative democracy, so it *seems like the biggest goal for the land bank should be making as many Detroiters into modest land owners as possible. This should doubly be the case since the properties in land bank inventory arrived through a loss of owner-occupancy in the tax foreclosure auctions.

There is probably going to be a battle with the land lords who have been largely unregulated and who have their own grievances as they try to make a dollar in a tough town. More Detroiters will want to be owners of the rentals, and the City will want the land lords to make deferred repairs and do a better job.

The corporate owners are going to advocate for large profit-seeking projects with the pitch that they create jobs and tax revenues in a town that needs both.

There are ways to bring these groups into alignment, but to do that we’ll need a framework that acknowledges the current distribution of ownership and work harder to distribute the ownership across the people who live here so their interests can come forward. Otherwise there will likely be an explosion of some sort as government, ownership, and the population continue to have a mismatch.