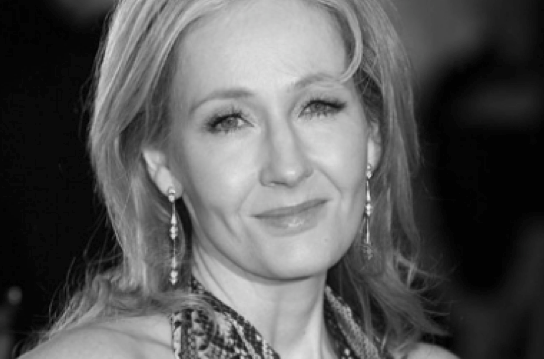 we do not need magic to transform our world.. we have the power to imagine better..

Joanne Rowling was born in July 1965 at Yate General Hospital in England and grew up in Chepstow, Gwent where she went to Wyedean Comprehensive.

Jo left Chepstow for Exeter University, where she earned a French and Classics degree, her course including one year in Paris. As a postgraduate she moved to London and worked as a researcher at Amnesty International among other jobs. She started writing the Harry Potter series during a delayed Manchester to London King’s Cross train journey, and during the next five years, outlined the plots for each book and began writing the first novel.

Jo then moved to northern Portugal, where she taught English as a foreign language. She married in October 1992 and gave birth to a daughter in 1993. When the marriage ended, she and Jessica returned to the UK to live in Edinburgh, where Harry Potter & the Sorcerer’s Stone was eventually completed. The book was first published by Bloomsbury Children’s Books in June 1997, under the name J.K. Rowling. The “K”, for Kathleen, her paternal grandmother’s name was added at her publisher’s request who thought that a woman’s name would not appeal to the target audience of young boys.

Rowling has led a “rags to riches” life story, in which she progressed from living on state benefits to multi-millionaire status within five years. She is the United Kingdom’s best-selling author since records began, with sales in excess of £238m. The 2008 Sunday Times Rich List estimated Rowling’s fortune at £560 million ($798 million), ranking her as the twelfth richest woman in the United Kingdom. Forbes ranked Rowling as the forty-eighth most powerful celebrity of 2007, and TIME magazine named her as a runner-up for its 2007 Person of the Year, noting the social, moral, and political inspiration she has given her fans. In October 2010, Rowling was named the “Most Influential Woman in Britain” by leading magazine editors. She has become a notable philanthropist, supporting such charities as Comic Relief, One Parent Families, Multiple Sclerosis Society of Great Britain and Lumos (formerly the Children’s High Level Group).

Seven years after graduating from university, Rowling saw herself as “the biggest failure I knew”. Her marriage had failed, she was jobless with a dependent child, but she described her failure as liberating:

Failure meant a stripping away of the inessential. I stopped pretending to myself that I was anything other than what I was, and began to direct all my energy to finishing the only work that mattered to me. Had I really succeeded at anything else, I might never have found the determination to succeed in the one area where I truly belonged. I was set free, because my greatest fear had been realized, and I was still alive, and I still had a daughter whom I adored, and I had an old typewriter, and a big idea. And so rock bottom became a solid foundation on which I rebuilt my life.
– J. K. Rowling, “The fringe benefits of failure”, 2008.

During this period Rowling was diagnosed with clinical depression, and contemplated suicide. It was the feeling of her illness which brought her the idea of Dementors, soul-sucking creatures introduced in the third book. Rowling signed up for welfare benefits, describing her economic status as being “poor as it is possible to be in modern Britain, without being homeless”

In April 2010, Rowling published an article in The Times in which she heavily criticised Cameron’s plan to encourage married couples to stay together by offering them a £150 annual tax credit.

Nobody who has ever experienced the reality of poverty could say “it’s not the money, it’s the message”. When your flat has been broken into, and you cannot afford a locksmith, it is the money. When you are two pence short of a tin of baked beans, and your child is hungry, it is the money. When you find yourself contemplating shoplifting to get nappies, it is the money. If Mr Cameron’s only practical advice to women living in poverty, the sole carers of their children, is “get married, and we’ll give you £150”, he reveals himself to be completely ignorant of their true situation. How many prospective husbands did I ever meet, when I was the single mother of a baby, unable to work, stuck inside my flat, night after night, with barely enough money for life’s necessities? Should I have proposed to the youth who broke in through my kitchen window at 3 am? Half a billion pounds, to send a message – would it not be more cost-effective, more personal, to send all the lower-income married people flowers?

The title of the seventh and final Harry Potter book was revealed on 21 December 2006 to be Harry Potter and the Deathly Hallows. In February 2007 it was reported that Rowling wrote on a bust in her hotel room at the Balmoral Hotel in Edinburgh that she had finished the seventh book in that room on 11 January 2007. Harry Potter and the Deathly Hallows was released on 21 July 2007 (0:01 BST) and broke its predecessor’s record as the fastest-selling book of all time. It sold 11 million copies in the first day of release in the United Kingdom and United States.

In an interview with Oprah Winfrey, Rowling gave credit to her mother for the success of the series saying that “the books are what they are because she died…because I loved her and she died”.