means witness or testimony in swahili – taking reports from the field, aggregating it and putting it on a map

heard of ushahidi first from either Ethan or Clay.. not sure which..

they are both on the board of directors: 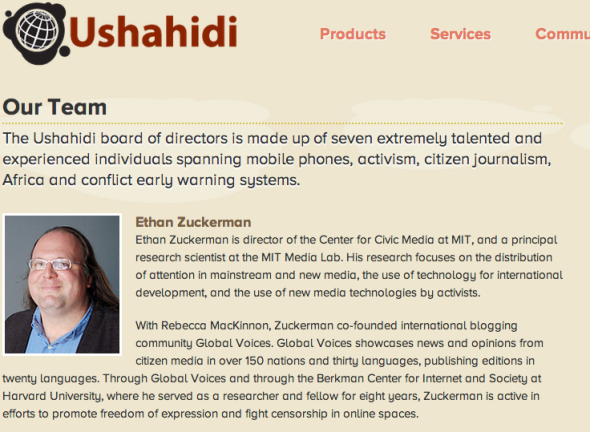 Michael does a great share of Ushahidi at about 11 min in on his tedx here:

From Knowledgeable to Knowledge-able

How cognitive surplus will change the world

How cognitive surplus will change the world

Clay Shirky argues that the history of the modern world could be rendered as the history of ways of arguing, where changes in media change what sort of arguments are possible — with deep social and political implications.

ushahidi means witness or testimony in swahili – taking reports from the field, aggregating it and putting it on a map

takes tacit information available to whole population, everybody knows where violence is, but no one person knows what everyone knows, and takes that tacit info and aggregates it and maps it and makes it public – crisis mapping – jan 2008..

now – ancient motivation allowed to be joined up..

shared source –  is designed for generosity – one of curiosities of our historical area.. how important our intrinsic motivations are.. (ie: boss/pay)

on average – 6-10 late pick up – late pick ups went up when fee added, the fine broke the culture.. the debt had been ridden.. 10 shekels to pick my kid up late..

we are rational, self-maximizing act, the social constraints (rather than the contractural constraints) created a culture that was more generous

fine for a dozen weeks.. then nothing changes. culture that got broken by fine stayed broken..

ushahidi is civic value – better for everyone in society..

civic value is not just a side affect..

Dean Kamen – free cultures get what they celebrate