5 min why are we letting this mal-function run us..

money – information of what we owe each other..

28 min – who’s propagating the illusion behind the money..

– a community of contributors and you take what you need as you need it..

there’s like a bank of resources at the bottom of that fir tree… there isn’t that kind of profit/interesting moding in natural systems.. it really isn’t necessary to have more than you need, unless you’re inculturated to that belief system… ie: scarcity

false – that scarcity is what gives money its value

we swim in unexamined/unconscious beliefs

those who consider themselves poor – are not poor..

this not enough ness – is at the heart/base of govt/religion..

39 – health is dependent on cooperation – ie: liver to body

39 – is competition the world way? or is that the money system that makes it that way?… i make the second claim..

46 min – stuck in the machinery of our economy

47 min – the middle class is the working poor too

51- another kind of faith/currency – river hours

1:00 – riverhours are a printed currency – once you print – you enter scarcity

fine – but not how nature works.. no? – why do we expect equal back – what if we just trust it will be fine

1:12 – can’t really even talk about this ecosystem if you don’t realize you aren’t the only element in the ecosystem.. look around you…

1:15 – use money as a tool/servant to what we want to become – rather than being a victim

time to wake up

“Money is just information, a way we measure what we trade, nothing of value in itself. And we can make it ourselves, to work as a complement to conventional money. It’s just a matter of design.”

Money is at the intersection of nearly every aspect of modern life. Most of us take the monetary system for granted, but it has a profound and largely misunderstood influence on our lives. ‘THE MONEY FIX’ is a feature-length documentary exploring our society’s relationship with the almighty dollar.
The film documents three types of alternative money systems, all of which help solve economic problems for the communities in which they operate.

‘THE MONEY FIX’ examines economic patterning in both the human and the natural worlds, and through this lens we learn how we can empower ourselves by redesigning the lifeblood of the economy at the community level.

intro’d to the money fix via comments on this post about Charles.. 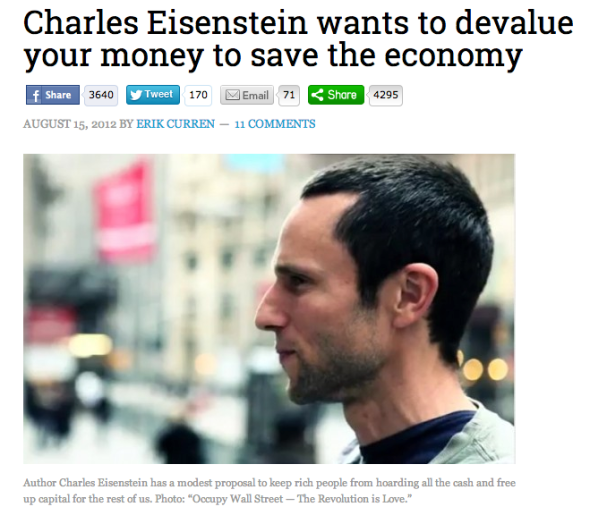 Most of our ancestors didn’t use money very much, not for food, shelter, clothing, or entertainment. All these were done by people helping each other out in the family or extended family,..

The monetized realm has grown, converting nature into products and relationships into paid services until there’s almost nothing left to convert anymore, ..

We can’t cut down more forests or increase the fish catch. What’s less recognized is that the social space to convert relationships into services has almost reached its peak too. We pay for almost everything, even the most intimate things, like cooking meals. People hardly sing anymore — we pay for our entertainment. There’s almost no community left, community being a group of people who share gifts. You look at your neighbor driving out of his garage in his car and you might say hi, but behind that there’s a view that you don’t need each other.

Our economy cannot function without growth because most money is not printed by governments, as people usually imagine, but is instead loaned into existence by central banks and commercial lenders, who can loan out ten dollars or more for every dollar they’re required to have in their vaults. In effect, then, a lender creates new money with every loan.

And the whole point of making loans is to earn interest for the lender.

But for the borrower, interest obliges her to pay back more than she borrowed. And to earn the money to pay back the principal plus accumulated interest, the borrower will need to create goods and services. Multiply that out across the whole economy, and it becomes an imperative for economic growth.

So, since all national currencies, whether the dollar or the Euro or the Yuan, allow lenders to earn interest, the whole economy becomes addicted to economic growth. As long as we continue to let banks create our money through their loans, we’ll all have to keep creating more goods and services, thus despoiling the Earth and exploiting each other just to stay above water.

“The problem with money is this growth imperative that converts everything into itself. And we’re reaching the peak of that,” Eisenstein explained. “It’s not about ‘sustainable growth,’ which is an oxymoron. And it’s not about finding some way to keep the growth system working. It’s about reclaiming life from money. It doesn’t mean eliminating all money but instead taking back certain realms, the natural and social commons, away from money.”

And to do that, Eisenstein proposes a new-and-improved kind of money: negative-interest currency. Essentially, it would be money that spoils.

If enough localities opted out of the dollar zone by starting their own local currencies, then pretty soon Wall Street and Washington could just be talking to each other with nobody else listening. The rest of us would be too busy trying to keep our money circulating in our own towns.

started watching again here.. not realizing the above…