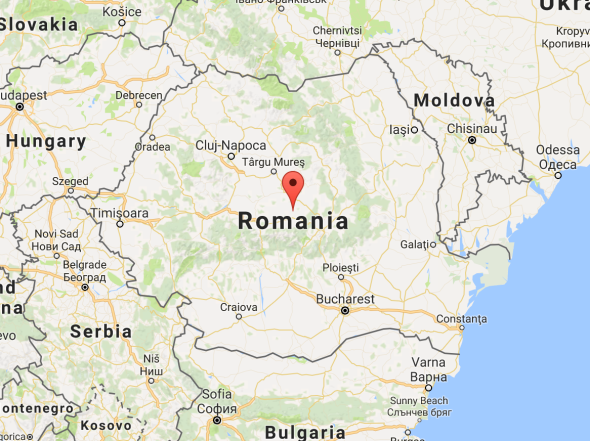 Romania (/roʊˈmeɪniə/ roh-may-nee-ə; Romanian: România [romɨˈni.a]) is a sovereign state located in Southeastern Europe. It borders the Black Sea, Bulgaria, Ukraine, Hungary, Serbia, and Moldova. It has an area of 238,391 square kilometres (92,043 sq mi) and a temperate-continental climate. With 19.94 million inhabitants, the country is the seventh-most-populous member state of the European Union. Its capital and largest city, Bucharest, is the sixth-largest city in the EU, with 1,883,425 inhabitants as of 2011.

At the end of World War I, Transylvania, Bukovina and Bessarabia united with the sovereign Kingdom of Romania. During World War II, Romania was an ally of Nazi Germany against the Soviet Union, fighting side by side with the Wehrmacht until 1944, when it joined the Allied powers and faced occupation by the Red Army forces. Romania lost several territories, of which Northern Transylvania was regained after the war. Following the war, Romania became a socialist republic and member of the Warsaw Pact. After the 1989 Revolution, Romania began a transition back towards democracy and a capitalist market economy.

Following rapid economic growth in the early 2000s, Romania has an economy predominantly based on services, and is a producer and net exporter of machines and electric energy, featuring companies like Automobile Dacia and OMV Petrom. It has been a member of NATO since 2004, and part of the European Union since 2007. A strong majority of the population identify themselves as Eastern Orthodox Christians and are native speakers of Romanian, a Romance language. The cultural history of Romania is often referred to when dealing with influential artists, musicians, inventors and sportspeople. For similar reasons, Romania has been the subject of notable tourist attractions.

@doctorow what’s happening now in Romania a lot like Little Brother & Homeland #romanianprotests against #CORRUPTION thanks for inspiration https://t.co/2VYnFA6q3M

via rt by @doctorow

I have never felt more like Marcus Yallow’s parents than I do right now. @doctorow@destruchticon #wtf

@doctorow Little Brother is finally awake: already over 120k in #bucharest tonight at #romanianprotests against #CORRUPTION in #romania https://t.co/i7jgu6JHuK

Having won on anti-corruption, the Romanian people aren’t backing down, want the government out. Bucharest now: https://t.co/nPYqWoWVdc