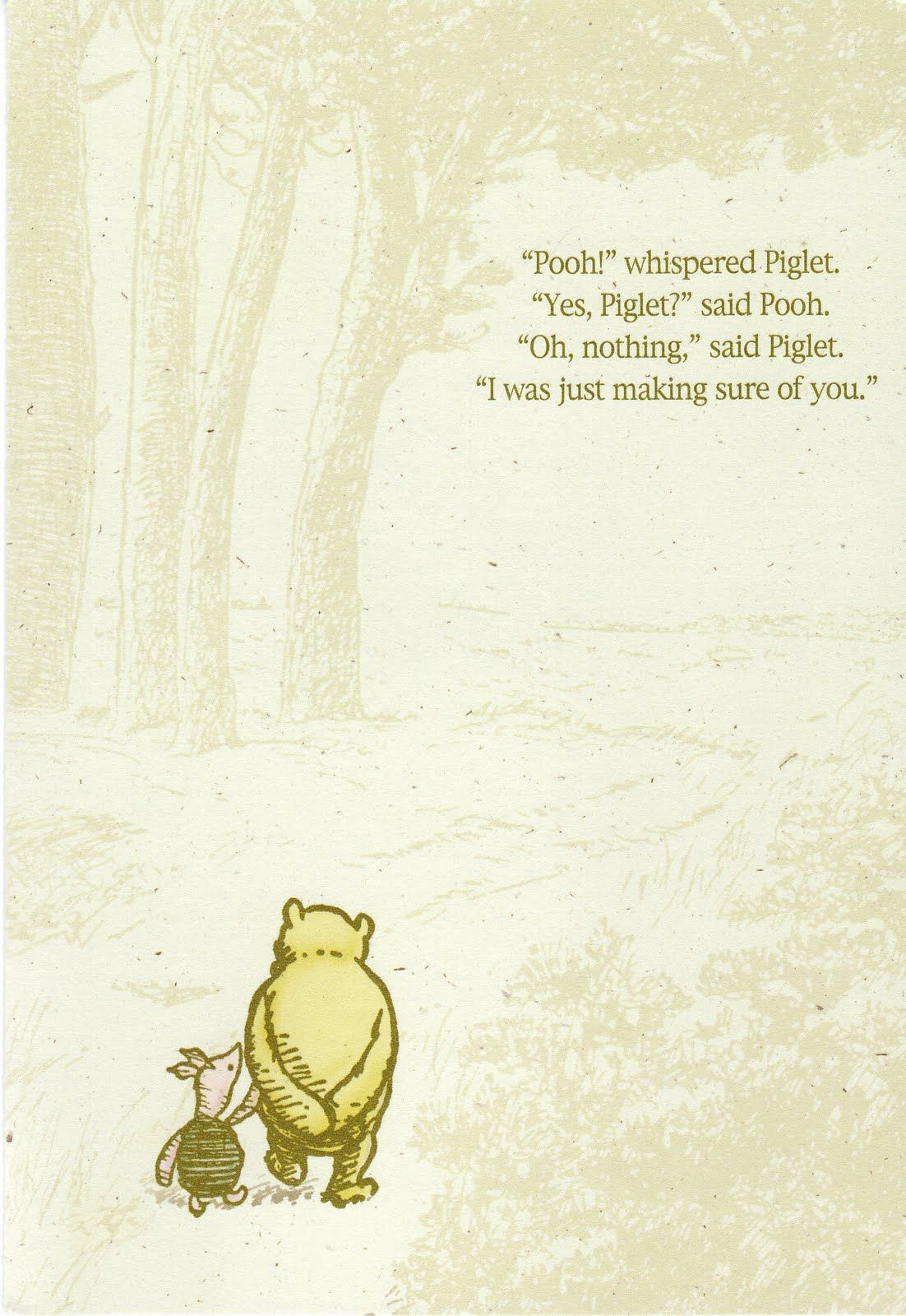 adding page while reading the complete tales of pooh

about a a milne (alan alexander)

christopher robin milne, the author’s only child, was born in 1920.. when christopher robin was a year old, he was given a stuffed bear from harrods, and later a tiger, pig and donkey.. the idea of brining these toys to life in a children’s book is credited to daphne milne..

when winnie the pooh was first published in the us, by ep dutton, milne wrote this tribute to his collaborator: when i am gone, let shepard decorate my tomb, and put (if there is room) tow pictures on the stone; piglet from page a hundred and eleven and pooh and piglet walking (157).. and peter, thinking that they are my own, will welcome me to heaven

that’s why he likes having it told to him again. because then it’s a real story and not just a remembering..b

as soon as he saw the big boots (of cr) pooh knew that an adventure was going to happen..b

that’s what an expedition means.. a long line of everybody – cr

it’s the best way to write poetry, letting things come (they – the shillings – wanted to come in after the pounds)

and kanga said very kindly, ‘well look in my cupboard, tigger dear, and see what you’d like’ because she knew at once that, however big tigger seemed to be, he wanted as much kindness as roo

by the time it came to he edge of the forest, the stream had grown up, so that it was almost a river, and, being grown-up, it did not run and jump and sparkle along as it used to do when it was younger, but moved more slowly. for it knew now where it was going, and it said to itself, ‘there is no hurry. we shall get there some day.’ but all the little streams higher up in the forest went this way and that, quickly, eagerly, having so much to find out before it was too late

and you think of things, you find sometimes that a thing which seemed very thingish inside you is quite different when it gets out into the open and has other people looking at it..

cr came down from the forest to the bridge, feeling all sunny and careless, and just as if twice nineteen didn’t matter a bit, as it didn’t on such a happy afternoon, and he thought that if he stood on the bottom rail of the bridge, and leant over, and watched the river slipping slowly away beneath him, then he would suddenly know everything that there was to be known, and he would be able to tell pooh, who wasn’t quite sure about some of it..

piglet thought that they ought to have a reason for going to see everybody, like looking for small or organizing an expotition, if pooh could think of something… pooh could.. ‘we’ll go because it’s thursday’ he said ‘and we’ll go to wish everybody a very happy thursday.. come on piglet’..

‘we’ve come to wish you a very happy thursday’ said pooh, .. ‘why, what’s going to happen on thursday’ asked rabbit, and when pooh had explained, and rabbit, whose life was made up of important things, said, ‘oh, i thought you’d really come about something’ they sat down for a little.. and by and by pooh and piglet went on again..

‘poetry and hums aren’t things which you get, they’re things which get you. and all you can do is to go where they can find you’ – pooh

(cr on doing nothing): ‘it means just going along, listening to all the things you can’t hear, and not bothering’

cr: ‘pooh, promise you won’t forget about me, ever. not even when i’m a hundred’