Based on deep and extensive research, including more than 200 interviews with leading innovators, Sims discovered that productive, creative thinkers and doers—from Ludwig van Beethoven to Thomas Edison and Amazon’s Jeff Bezos—practice a key set of simple but ingenious experimental methods—such as failing quickly to learn fast, tapping into the genius of play, and engaging in highly immersed observation—that free their minds, opening them up to making unexpected connections and perceiving invaluable insights. These methods also unshackle them from the constraints of overly analytical thinking and linear problem solving that our education places so much emphasis on, as well as from the fear of failure, all of which thwart so many of us in trying to be more innovative. 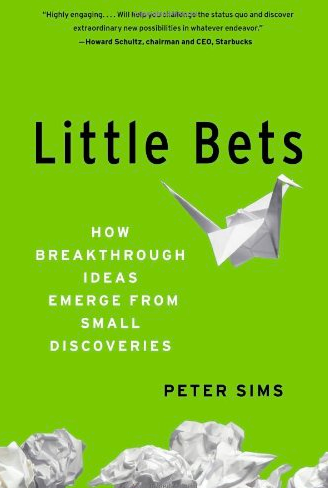 Fixed mind-sets cause people to be overconcerned with seeking validation, such as grades, titles, or social recognition.  Conversely, those favoring a growth mind-set believe that intelligence and abilities can be grown through effort, and tend to view failures or setbacks as opportunities for growth.  They have a desire to constantly challenge and stretch themselves.(page37

Praising ability alone reduces persistence, while praising effort or the processes a person goes through to learn, leads to growth mind-set behaviors….regardless of age.(page 41)

This is another reason why the little bets approach can be so effective: It helps us to cultivate an exploratory, growth mind-set.  Practicing little bets frees us from the expectation that we should know everything we need to know before we begin.  Redefining problems and failures as opportunities focuses our attention on insights to be gained rather than worrying about false starts or the risks we’re taking.  By focusing on doing, rather than planning, learning about risks and pitfalls of ideas rather that trying to predict them with precision up-front, an experimental approach develops growth mind-set muscles. (page 49)

What the creation of low cost, rough prototypes makes possible is failing quickly in order to learn fast.

The authors found several “patterns of action” or “discovery skills” that distinguished the innovators from the noninnovators, which in addition to experimenting, as we’ve seen, included observing, questioning, and networking with people from diverse backgrounds, all of which, Dyer and Gregersen believed, can be developed. (page 107)

“Creativity is just connecting things,” Jobs told Wired magazine. “When you ask creative people how they did something, they feel a little guilty because they didn’t really do it, they just saw something.  It seemed obvious to them after a while.  That’s because they were able to connect experiences they’ve had and synthesize new things.  And the reason they were able to do that was that they’ve had more experiences or they have thought more about their experiences than other people.  (page 108)  my comment – diverse perspectives and experiences are crucial to solve complex problems as is self-reflection

“But by the time they are six and a half years old they stop asking questions because they quickly learn that teachers value the right answers more than provocative questions.”  It’s a haunting finding that raises serious concern about our education system. Specifically, what is the purpose of education?  Is it to convey knowledge, as the current system is weighted, or is it to inspire and nurture an ability to constantly learn? (page 115)

It’s a powerful finding that emerges time and time again.  Instead of placing significant value on external measures of achievement, parents of those who become successful creatives tend to emphasize pursuing whatever interests they have.  …..their parents tend to support their kids’ natural pursuits, while also stressing work ethic and quality. (115)

….innovators routinely networked with people who came from different backgrounds.  It’s a way to challenge one’s assumptions and gain broader insight. ….(this) finding mirrors a preponderance of evidence that indicates that diversity, be it of perspective, experiences, or backgrounds, fuels creativity. (page118)

Invention and discovery emanate from being able to try seemingly wild possibilities and work in the unknown; to be comfortable being wrong before being right; to live in the world as keen observer, with an openness to experiences and ideas; to play with ideas without censoring oneself or others; to persist through dark valleys with growth mind-set; to improvise ideas in collaboration and conversation  with others;

and to have a willingness to be misunderstood, sometimes for long periods of time, despite conventional wisdom.  (page 161)