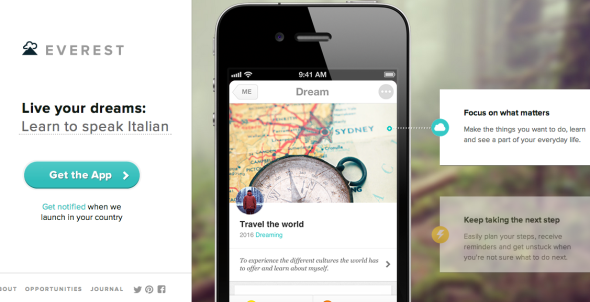 via their about page:

Everyone has their Everest.
We help you climb yours.

Founded on the belief that there is no separation between creating a better self and a better world, Everest exists to unlock human potential. Whether people dream to run a marathon, travel the world, learn how to DJ, or read more nonfiction, Everest helps them keep taking the next step.

when we first heard of everest:

via Amber Rae on fbAlexander Osterwalder – bif 8read through their download plans et al. so – so reasonating w/app idea –  http://evr.st/ all ready to go/going.
am totally geeking out. many of their advisors are part of our research over the years.. [jane mcgonigal, simon sinek, belsky, whitney johnson, dale stephens..] their founder, Francis – is also part of a start up disrupt ed.. i don’t see much going on there.. but that tells me where his heart is.
imagine we convince them.. dreaming isn’t just for after hours or after you graduate.. then they won’t have to write mounds on how to get money for this.. how to sustain it… how to get people…
i’m thinking this is a matchup that could turn all the vision we are seeking in ed, on a dime. the shift in culture. to where we find we already have all we need.
again – our vision of an app – to ground the chaos as we redefine ed.
i see tweaking the everest app, or perhaps some small offshoot to just prototype, that is more about the networked individualism piece.. the mesh the app creates, so that the dreaming, connecting and doing become more self-directed, and actually, more invisible, the more you talk into the app.
_________
_________
not the same.. but didn’t know where to put this and wanted it somewhere
https://www.cnn.com/2019/05/24/asia/everest-climbers-intl/index.html

may 22 2019 – roughly 320 people in the queue to the top of the mountain in an area known as the “death zone.”
Danduraj Ghimire, director general of Nepal’s Tourism Department, rejected suggestions that the jam of climbers contributed to the deaths, calling such claims “baseless.” –
main cause of deaths on Everest has been high altitude sickness which is what happened with most of the climbers who lost their lives this season as well.