Perhaps the best way to unleash the genius in each person, that art that gets them out of bed everyday, to put in the 10,000 hours of expertise, is to set them free, in spaces of permission, where they have nothing to prove. And where there’s plenty of crowdsourcing for gatherings that matter. [ie: finding your people everyday is a breeze.]

Perhaps the best way to unleash the genius in each person, is to facilitate and crowdsource curiosities, by hastening the time between – finding what matters to you and finding your people.

In order for this to happen, we are suggesting the removal of compulsion from our current definition of public education.

No doubt, no delusion, chaos is sure to abound. We’re wanting to create and prototype an app to ground that chaos.

An app that would encourage/create/support:

1) People talking to themselves daily, asking themselves if they are doing what matters. Self-assessment vs standardized assessment. We see this as the most important of five elements to start this anywhere.

2) People connecting to people in their city/community, a strategic serendipity. Finding others that are noticing, dreaming about, wanting to connect and/or do, the same things.

3) People’s mesh network, their footprint or trail. The future intention economy, where credentialing comes from a networked individualism expanded/grown over time.

A couple of scenarios:

[graphic links to page of just this scenario]

Julia, age 12, uses a donated/recycled laptop and the donated wifi from the wifi bank, to voice record the following before she goes to bed:

I noticed a lot of my friends’ parents have cancer. They keep talking about early detection. I asked my mom and she said if you find out early on, the cancer can usually be cured, but that not enough people find out early. I also watched a video of a 17-year-old that wrote a recipe to cure cancer and is now working at Stanford. I’m dreaming about finding ways to improve early detection. I want to connect to people who are experts at this and see what I can learn from them.

Vicki, age 25, uses her iphone and texts while waiting at the doctor’s office:

I just found out my mom has cancer. They told her they didn’t find it soon enough and that it’s spreading too fast. I’ve got to research myself, find out some other answers for her.

Tom, age 7, uses his mom’s ipad and his family’s wifi access, to record the following:

My mom has been doing this healing stuff my whole life. I’ve never believed in it before. But she started doing it with me, because I have/had asthma, and now I don’t have it anymore. I’m really interested in seeing if it can help people with cancer.

The app connects them.

A mesh network created for each of these could have one small node representing their intense curiosity and that’s it. Or, it could be the start of an offshoot node, as they advance into the study of health and medicine. Either way, this cancer node could be detected by the app in a couple weeks by someone else talking to themselves about the same things and then they all receive notification of another potential connection.

Joe, age 15, uses the free wifi from the wifi bank and his free recycled cell, and he texts on morning:

I notice we waste water every time it rains. The public sprinklers keep running. I would love to fix that.

Miguel, age 72, a retired teacher, uses his laptop and types that afternoon:

I noticed the sprinklers in the city run when it’s raining, I’m imagining saving tons of taxpayers money & water by fixing that, I want to connect to city people or whoever to figure out what can be done.

That evening, Joe and Miguel receive each other’s text #, with the topic that connected them, other numbers if others mentioned the same/similar, and possibly a suggested location for meeting up.

Joe, would already have a mentor/facilitator (be known by someone), but it may have initially been by appointment (ie: if everyone in our district was freed right now, 1:8 ratio, so we’d connect 8 kids to one adult just to get rolling). Joe & Miguel could hit it off and Miguel could become Joe’s person, or they could just fix the sprinkler problem and that would be it.

Depending on how things turn out…one of the nodes on Joe’s future mesh network could be the company he started for sprinkler systems, or that he got into programming from this initial venture.

again, three benefits/goals of the app: 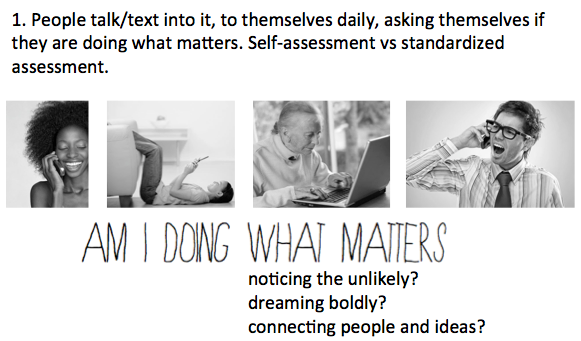 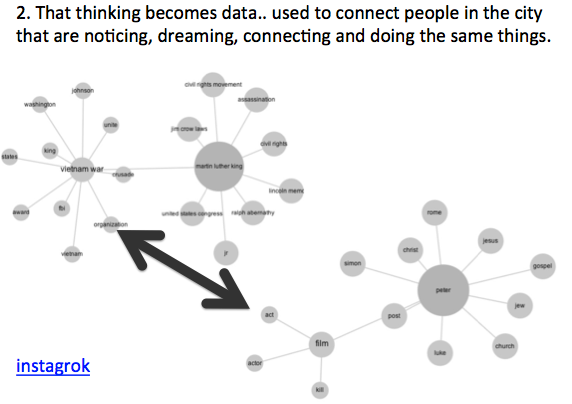 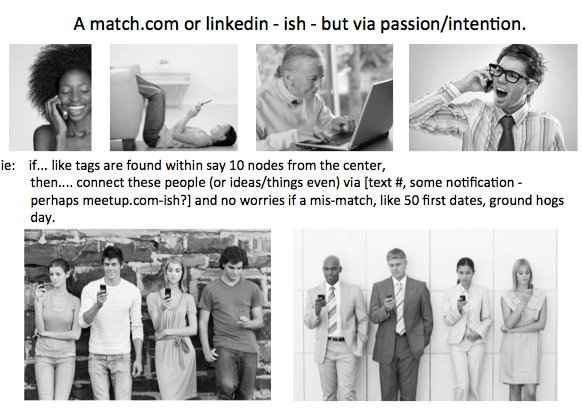 [the latest up date from Kirill’s expertise and brilliance.

and George shares a glimpse of the vision here – with his post on a twitter archive – sounds of Michaels help – using twitter. so it’s happening, tech is there, souls crave it, how to hasten it?]

working on ways for tech to hasten the time between finding what matters and finding your people.

perhaps instragrok-ish code is more the connector  (see above #2)

and brain-ish code  (and twitter archive) is more the trail,  or non-linear portfolio – (see below #3) 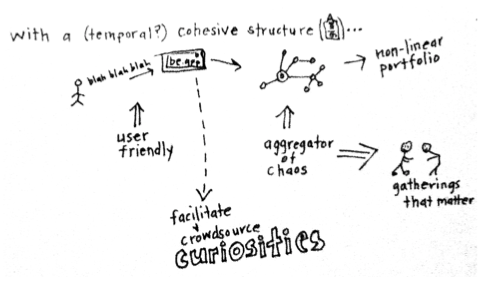 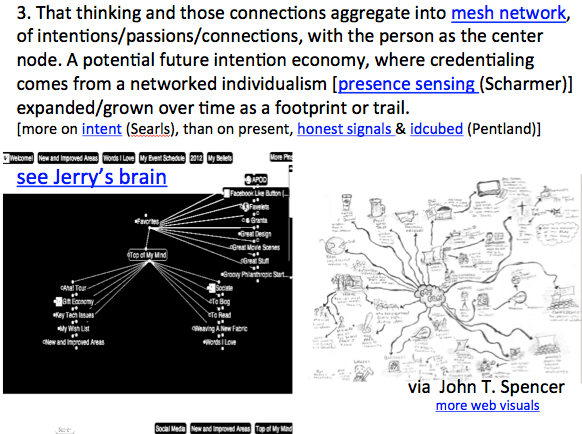 This app is nothing special, in fact, success will be that we no longer need it in a year’s time. Perhaps it’s even more a placebo. A piece of a synchronicity, that perhaps, would be enough to help the world see/believe/wake up.

There are amazing things going on everywhere, they currently however, are just not equitable. [As in Dewey’s definition of public ed: a democratic society.] Rather than waiting for all the current incredible innovations to scale, and even if they did would that suit everyone, why not scale each individual. Why not set individuals free to be their own start up. Perhaps that’s the equity we’re seeking.