A collaboratory, as defined by William Wulf in 1989, is a “*center without walls, in which the nation’s researchers can perform their research without regard to physical location, interacting with colleagues, accessing instrumentation, sharing data and computational resources, [and] accessing information in digital libraries” (Wulf, 1989).
*Community owned spaces.

For the creating of a mental space, freeing up of people to partake, we are requesting a waiver of waivers: a year sabbatical for any who so chooses in our district, (kids, teachers, admin, et al), as we time lapse the last 2 years (of this 4 year plan to redefine school crafted by kids) into one year. We are not interested at all in raising test scores, we are interested in raising people. Their hopes, their dreams, their children, their souls.

For the creating of a physical space, we are looking for angel investments, with no strings attached, to model what we envision the future being, once we realize, we have all we need. Taking care of current financial needs/obligations as we shift our focus to things that matter, via a currency that matters.

why:
Over the past four years, our district allowed us space to listen to youth, without an agenda. Together, we noticed that many people, including us, were stressed. We started an investigation of sorts. We noticed most people can’t wait till 3 or 5pm, till the weekend, or summer, or vacation, or graduation. We wondered why. We started experimenting with ways to rework the seven hours a day, the twelve plus years, and the ensuing mindset, we call school. We wondered why we accept school’s compulsion. We wondered why so many of us haven’t even noticed how blind we’ve become to this daily allegiance. We started to see that standardization doesn’t set well with our souls. It keeps us from being ourselves.
This year, Colorado will receive 17.9 million dollars for Race To The Top initiatives. If one takes time to look at the details of the race, it’s about getting better at taking tests on such things as rationalizing a denominator. Our county is sixth in the nation in suicide rate. Once every nine days someone takes their life. The measure we are currently using toward success, the actions we are currently using to fix problems, even to determine which problems are problems, aren’t boding us well.
Via Traci Fenton of Worldblu, we lose 300 billion a year because people aren’t engaged in the workplace (yeah… just imagine if we include moneys toward disengagement in schools … perhaps tack on 600 bill more+). She notes truly democratized organizations hold these beliefs: people are good, and, you can’t have anything to prove (ego kills culture of a community, the feeling you have to prove yourself, kills value/culture of a person).
Oscar Wilde writes, Most people are other people. Their thoughts are someone else’s opinions, their lives a mimicry, their passions a quotation.
We are working on why that is so. We are seeking to set people free.

how:
We are now half way through a plan youth created while in this space. This halfway mark represents a big shift.
be you.
The first two years have been a true disruptive innovation, where we were working in the shadows, testing and prototyping and failing and learning. We experimented with spaces where people could tap into their own genius, their own art. We were seeking ways to facilitate self-directed learning for an individual. Our findings are not new. Practicing our findings, however, will require a change in mindset. It will require a culture of trust, with (mental & physical) spaces of permission.
be us.
The second two years’ focus will be more on community, how do we become us. This necessitates more visibility, a coming out phase. We are finding out what types of gathering spaces our people want, need, believe in, most. [ie: We have over 100 kids doing robotics and programming as a club in whatever spaces they can find after school hours. So we’re seeking to secure a 4000 sq ft space for them, and a means to transcript these high use skills. We’re looking for spaces for high end videographers, play writers, linguists, museum curators, geo-cachers, engineers, scientists, mathematicians.]
This phase will be heavy on the art of conversation. How do we listen to each other without an agenda, on an ongoing basis. Web access has shown us the value of connection and ways to better connect with the invisible, the silent, globally. We plan to use that insight and technology to better listen to each other, locally. The web teaches us the value of transparency and of the ability to lurk. Both these feed into a culture of trust. We know that for any type of thriving sustainability to happen within a community, we must create, together.

what:
We are seeking to redefine public education. We are respectfully questioning everything, especially how we spend the hours of our day, and who drives it. We are redefining success to be how well we are doing, do we have soul peace, and how well our community is doing, how fully alive our people are. We’re believing the way to world peace is soul peace.

what would help:
We are looking for like minded dreamers (perhaps Hsieh, Gates, Buffet, Shadyak, Wilson, Stryker…) interested in financially jump starting this next phase. We’re imagining 20 million. (see possible evidences for more) See Diane Ravitch’s – what if we had another 20 billion.
We see the jump start as an investment in a mock future community, where red tape is essentially nill, and perhaps because of the incubation provided over the last four years, time lapse of the revolution community can happen in a more humane time frame. [Perhaps the “district is on sabbatical”, perhaps the collaboratory becomes a space for anyone in the world on sabbatical, with f2f paid or partial paid.] We believe if we base transactions on trust rather than policy, we can model doing much more with less. Part of our suggested jump start investment will come from a rough analysis of school district funding, what we now get from government, so that the financial model can be scaled across if so inclined, per census rather than seat time and/or test scores. Spending will be determined by ongoing crowd-sourcing of these gatherings per choice. Something that may seem new will be the focus we place on spaces determined by why we gather, rather than the current focus on managing what we do and how we do it, in predetermined and compulsory places.
We’re feeling the 20 million represents/demonstrates:

collaboratory:
To look more like the solution, a first space we are looking to secure is in the heart of the city. As a hub, or a home base, our kitchen table, so to speak. Where we will come together locally and virtually, to notice the unlikely, dream boldly, make connections, and start doing things that matter, to us. We are especially interested in a neutral space of high quality, that represents the value we place on this ongoing community conversation. This space may resemble more of a maker space, as conversations that matter often happen while we’re co-creating.

We’re imagining anywhere from three months to a year before more local people feel a pull to self-fund. We believe this incubated community will model educational funding per census, via an ongoing community voice, is not only healthier for its people, but more financially sound and sustainable as well. We believe non-incentivized sustainability occurs when you focus on a common why. 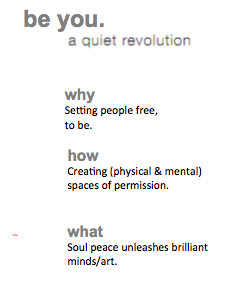 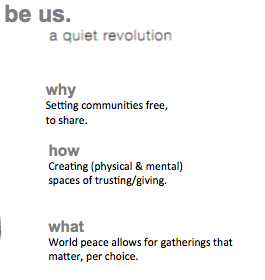 Learn more about our work through the lab here. On the site find , TEDxfrontrange talks by three lab students, and our be you book draft of this vision. We have been filmed by PBS to air in an education episode the April of 2013.