on future govern\ment ness – via neighborhood – Shani Graham is closest explanation of what Channing has going in his neighborhood.

more on Channing’s neighborhood in our local paper (and in a book):

Their block parties now draw 65 to 100 people. Canopies are set up along the street. Neighbors barbecue, play games and watch movies on a big screen.

” I’ve had a lot of friends over when we were having soup nights and it was amazing because they would say, ‘You can do this? I want my neighborhood to be like this. You actually know your neighbors, I don’t even know what they look like,'” said 14-year-old Satori Bahus-Meyer, who attends the evening gathering with her parents, Mary Bahus-Meyer and Channing Meyer.

Goldstein said that she had friends when she lived elsewhere but not like this. “This is so much more involved. It’s that small-town kind of feeling, but it’s safe,” she said. “It’s that feeling that there are so many people that come in and come out of your life but right now, it’s our time to be together.”

The neighbors watch out for each other’s children and house-sit when families are away.

Roger Tropf says it takes him an hour to walk two blocks because he chats along the way.

“It goes back to the ’40s, ’50s where TV wasn’t a place where you sat around all night long playing video games or whatever,” he said. “You walked around the neighborhood. It’s that ’50s feel. We all care about each other, we’re all able to share and help each other.” When he was in the hospital a few years ago, his wife put out an email, and they had neighbors immediately shoveling the sidewalks and driveway.

Mary Bahus-Meyer added that any neighborhood can do this by breaking down boundaries and sharing a bowl of soup.

Stuckey quoted Wirsich Roberts in her book as saying, “Everyone needs support and friendship; everyone. I believe that if everyone had a soup night to go to, there would be no more crime, no more war. I really do believe that.” 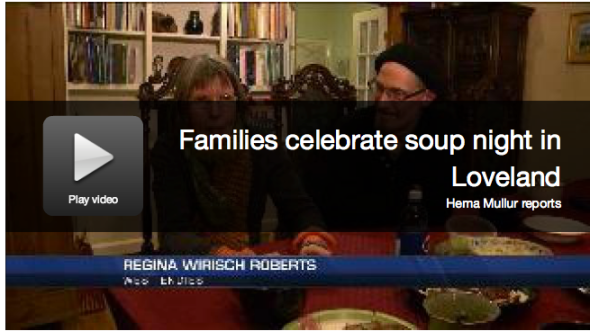