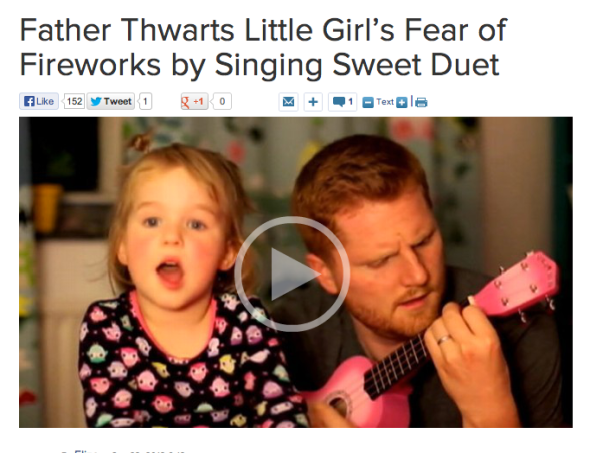 We live in a small village and every now and then a firework will go off because there’s a wedding or a holiday we didn’t know about,” Ames, 32, who is studying abroad to finish his Ph.D. in atomic physics, told “Good Morning America.” “I was trying to get her tucked in and the fireworks were going off like ‘boom, boom, boom,’ and she just wouldn’t go down.”

“I’m a fan of ‘The Jerk’ [movie] and I really like that duet, and I thought it’d be a cute one to show grandma and grandpa,” Ames said of his decision to upload the video to YouTube. “It was a new camera, so I figured I’d put it on YouTube instead of posting it directly to Facebook, because you tend to lose some image quality that way.”

“We had never tried to harmonize ever,” said Ames, a self-proclaimed music enthusiast. “At one point she stopped and interrupted me and told me to ‘Take this part,’ and I was really impressed. It was late at night and she was just being silly, but I was even surprised by that.”

“So many parents have so many magical moments that happen with their kids, and I just happened to get this one on camera,” he said.

what a great example of listening/breathing life in 24/7. knowing and being known. 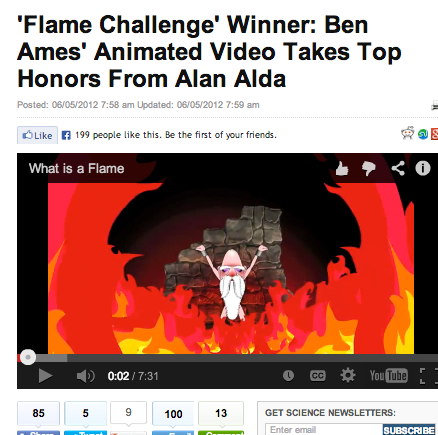 Although this Flame Challenge entry was first submitted on Vimeo, this goes out to all the YouTube viewers out there. Thanks to Alan Alda and The Center for Communicating Science for creating such an educational and creative venue!

Ben Ames, a graduate student in quantum optics, made an animated video with a musical conclusion to provide an explanation an 11-year-old could understand. His entry won actor Alan Alda’s “The Flame Challenge.”

Ames is studying at the University of Innsbruck in Austria.